Ovarian vein incompetence and congestion is a common problem in women, which is often overlooked.  Dilated ovarian and/or pelvic veins causes venous incompetence and reversed flow in the ovarian veins.  This in turn causes pelvic pain or aching around the pelvis and lower abdomen and can extend into the back.  Because these veins are internal, the condition is often under-recognised.  If the reflux is severe, the venous incompetency may manifest as varicose veins on the vulva/vagina, or worsening/recurrent varicose veins in the legs. It is estimated that a third of all women will suffer from chronic pelvic pain during their lifetime. 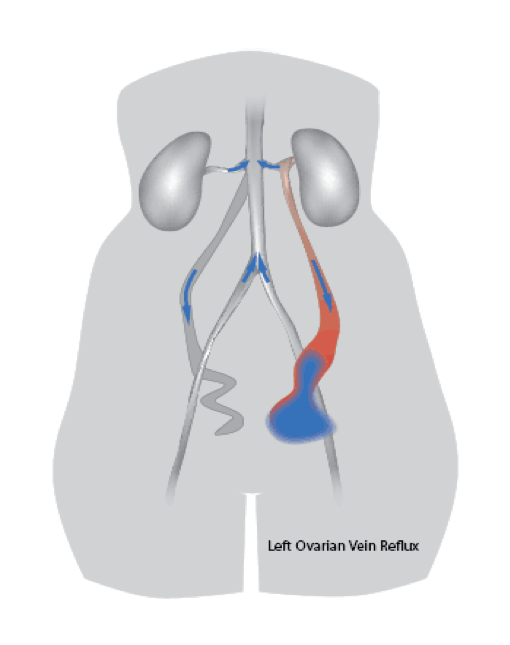 What are the causes of Ovarian Vein Syndrome?

What are the signs and symptoms of Ovarian Vein Syndrome?

Symptoms arising Ovarian Vein Syndrome include pelvic pain, pain during or after intercourse, feeling of fullness in the legs, stress incontinence and worsening of symptoms associated with irritable bowel syndrome (IBS). As previously mentioned, it can also result in varicose veins on the vulva/vagina, inner thigh and sometimes the buttock and down the legs. Other venous problems such as leg pain during the menstrual cycle and recurrent varicose veins is also not uncommon. 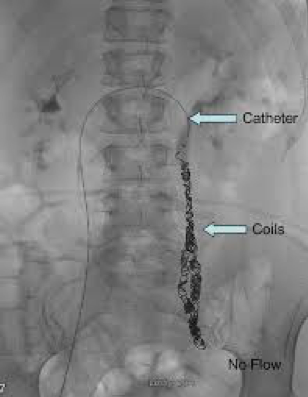 Ovarian Vein Embolization is a minimally invasive treatment done under twilight sedation.  Imaging guidance and a small catheter is navigated into the ovarian vein within the pelvis and the veins are occluded with small platinum or stainless steel coils which obstruct the veins causing them to clot.  A sclerosant foam is often also injected to reduce the chances of the vein re-opening after the procedure.  Both approaches are safe and equally comfortable.

What happens after the procedure?

Patients normally return home on the same day after a short period of recovery from sedation in the hospital.  Patients should not drive themselves home.

Normal activity can resume the following day, however heavy lifting and exercising should be avoided for several weeks.  It is important to stay well hydrated during this period.  There may be some discomfort and pelvis in the following week while your body adjusts.  Your Doctor will give you advice on pain management upon discharge.  The following menstrual cycle may also be uncomfortable while your body re-adjusts.

If you suffer from varicose veins in the legs, your Vascular Surgeon will speak to you about treatment for these after your procedure. It is likely that they will still require treatment but hopefully the outcome will be more permanent once the ovarian system is treated.